Buyer Demand is Finally Starting to Cool Down

Aside from hard to avoid high temps and excessive smoke from nearby wildfires, things are finally starting to cool down a bit in the Mile High City. As predicted earlier this year, there has been a gradual cool down of buyer demand. Many buyers have been frustrated by a lack of inventory or have been priced out of the market due to rising prices and slower wage growth. This reduced buyer pool, along with an increase of homes brought to market last month, has allowed housing inventory to increase for a change.

In July there were 4,056 active listings, which was up almost 30% from the end of June. We normally see an increase in homes on the market in summer, but last month outpaced what we have seen historically. That said, average home price increases were still well above the historical average for a single month, coming in at 16.4% ahead of June. These price increases should slow into the fall and prices could even decline later this year due to a large gap between housing prices and wage growth. 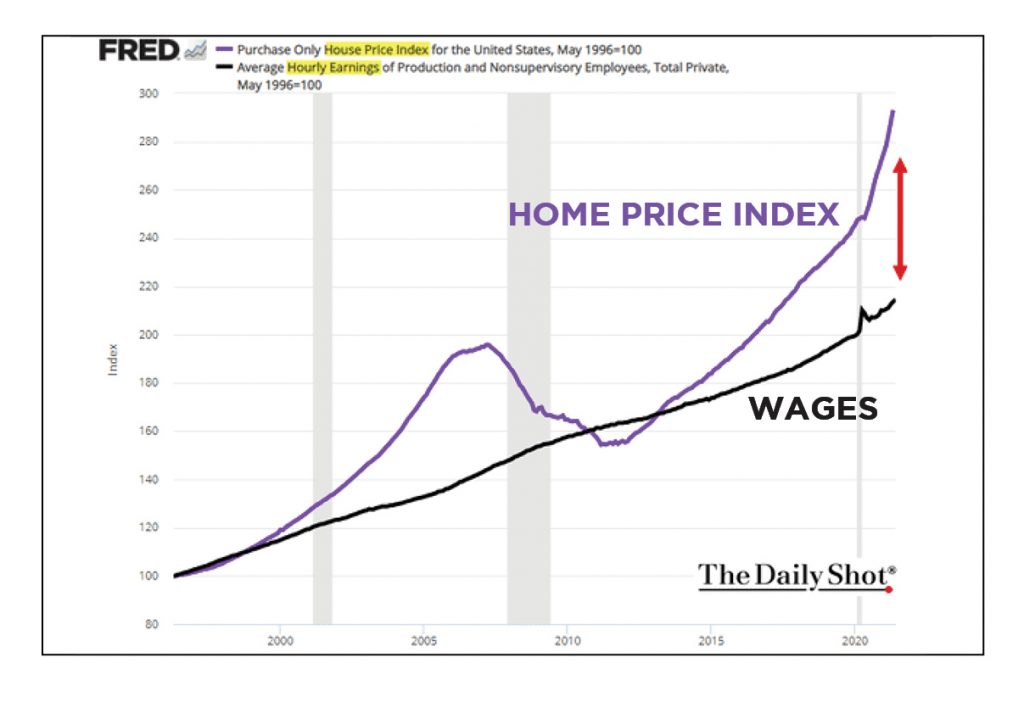 Despite recent changes, Denver is still a strong seller’s market. However, it is not quite as red-hot as it was at the beginning of the year. The average number of showings per active listing back then was in the stratosphere: between 20-22 per home. The competition was fierce. To put that in perspective, that is almost double the historical number of people touring homes in January/February. In July the average dropped to 12 showings per active listing. We haven’t had a number like this in over six months of activity. Showing traffic is important because it is a sign of what is to come. This reduced traffic is a signal that fall will be a slightly easier time to buy a home. 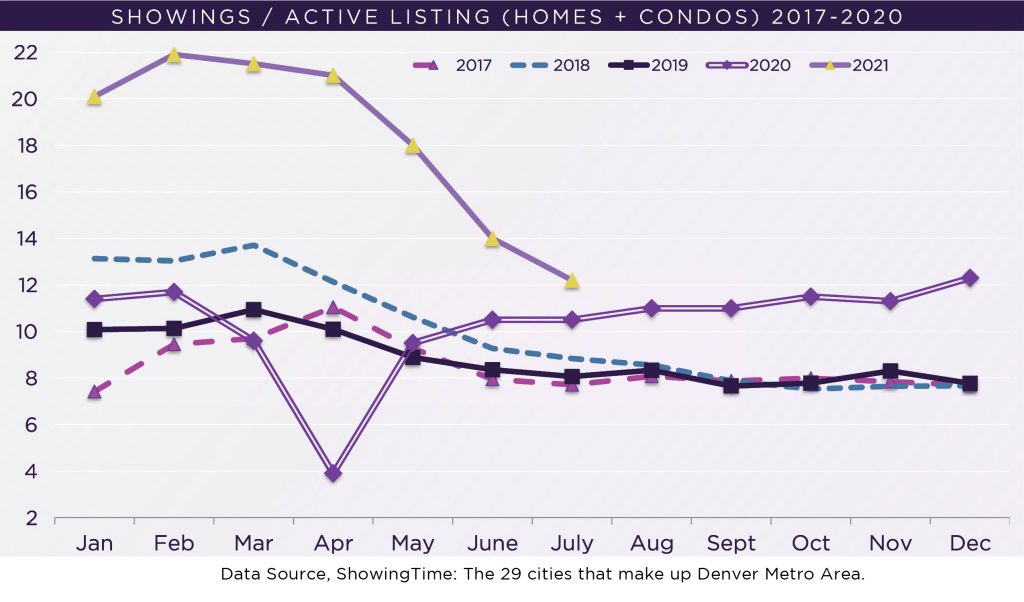 Another indicator of this slight market cooldown is that homes are generally getting fewer offers. There are still multiple-offer situations. There are sometimes 2-4 offers to choose from, but not 10-15 like we were seeing at the start of the year. Buyers should face more of a fair fight when placing offers. Many offers are also not as extreme as before. The average home is selling for around 3% over asking price, not 30% like some of the outliers from earlier this year. Sellers who know this will list their homes at more reasonable prices. This will ensure that they do not overreach and end up on the market for longer than desired or having to reduce their list prices.

For example, Wash Park East in the map sample had 35% of homes sell over asking price, and homes there sold for $1.57 million on average. Not too shabby! Now compare those numbers to Wash Park West. 63% of homes sold over asking price, and the average price was slightly lower at $885K. That area of the map is shaded orange. This signifies it had a fairly high percentage of homes selling at a premium. Now compare both of those neighborhoods to Athmar Park across I-25. There was a staggering 70% of homes that sold above asking price. The average sales price was $483K. That area of the map is shaded red. This indicates that it was red-hot in terms of buyer demand.

Homes there were selling well above asking price over the past year. These three neighborhoods are a good representation of the current macro trend in Metro Denver. Homes in luxury neighborhoods like Wash Park East had a significant number of homes sell for over asking price. However, lower priced areas brought far greater premiums. This is in large part due to a lack of entry-level homes for sale and intense demand. 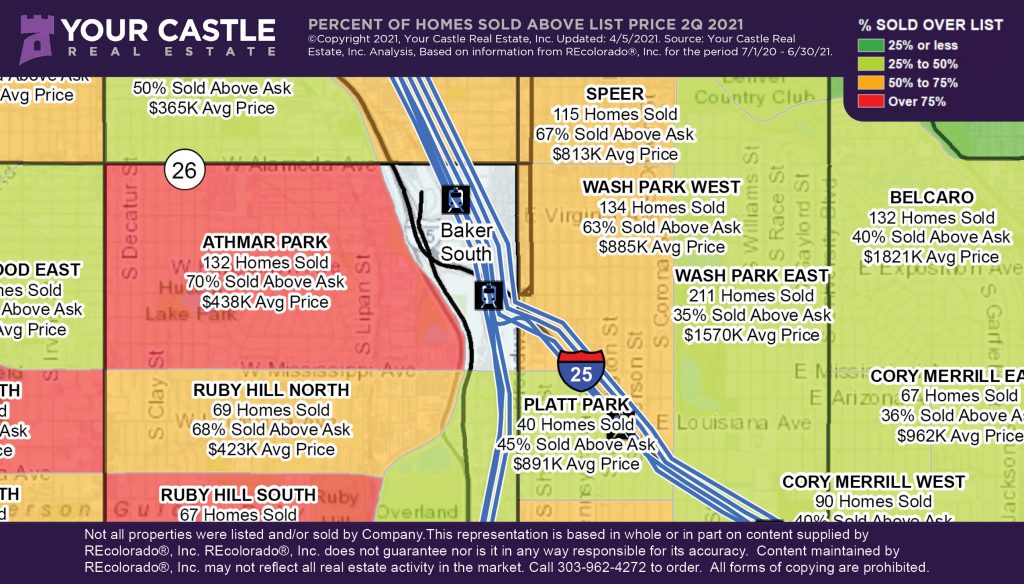 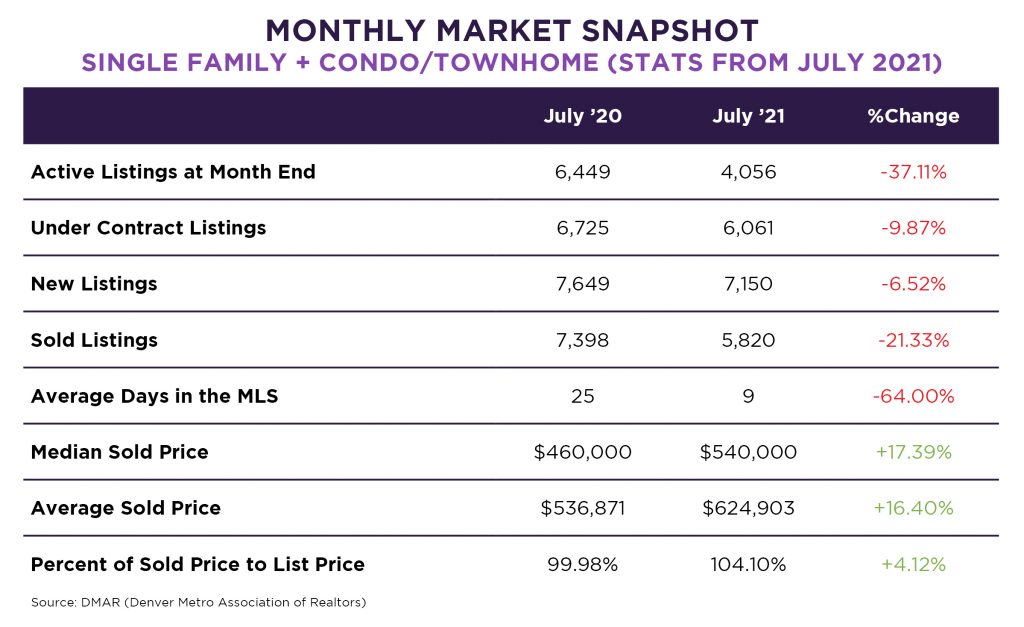 If you have further questions about the market, buying, or selling, please do not hesitate to reach out to an agent on our team as soon as possible. We also offer up to 40 free classes a month to our agents and their clients. There are have in-person and/or virtual formats available. Check out our training calendar for the most up-to-date offerings.